The last exhibition was in October 2021, it was of the gardens at Rousham. Locked down for eighteen months in his studio in the gardens at Rousham, Francis Hamel built up a large new collection of paintings of this astonishing landscape. Monty Don describes William Kent as the genius of eighteenth century garden design and Rousham as his masterpiece. This new collection of over eighty paintings and drawings captured both the seventeenth century walled gardens with espalier pear trees and Box parterre as well as the eighteenth century Pleasure grounds designed by William Kent.

The work was shown at Rousham at the beginning of October 2021 and then moved to London to run from 18th October to 12th November at The John Martin Gallery.

A book of the paintings was published to coincide with the exhibition featuring essays by Francis Hamel, the garden designer Tom Stuart-Smith, the Director of the Garden Museum Christopher Woodward and the author Joanna Kavenna. 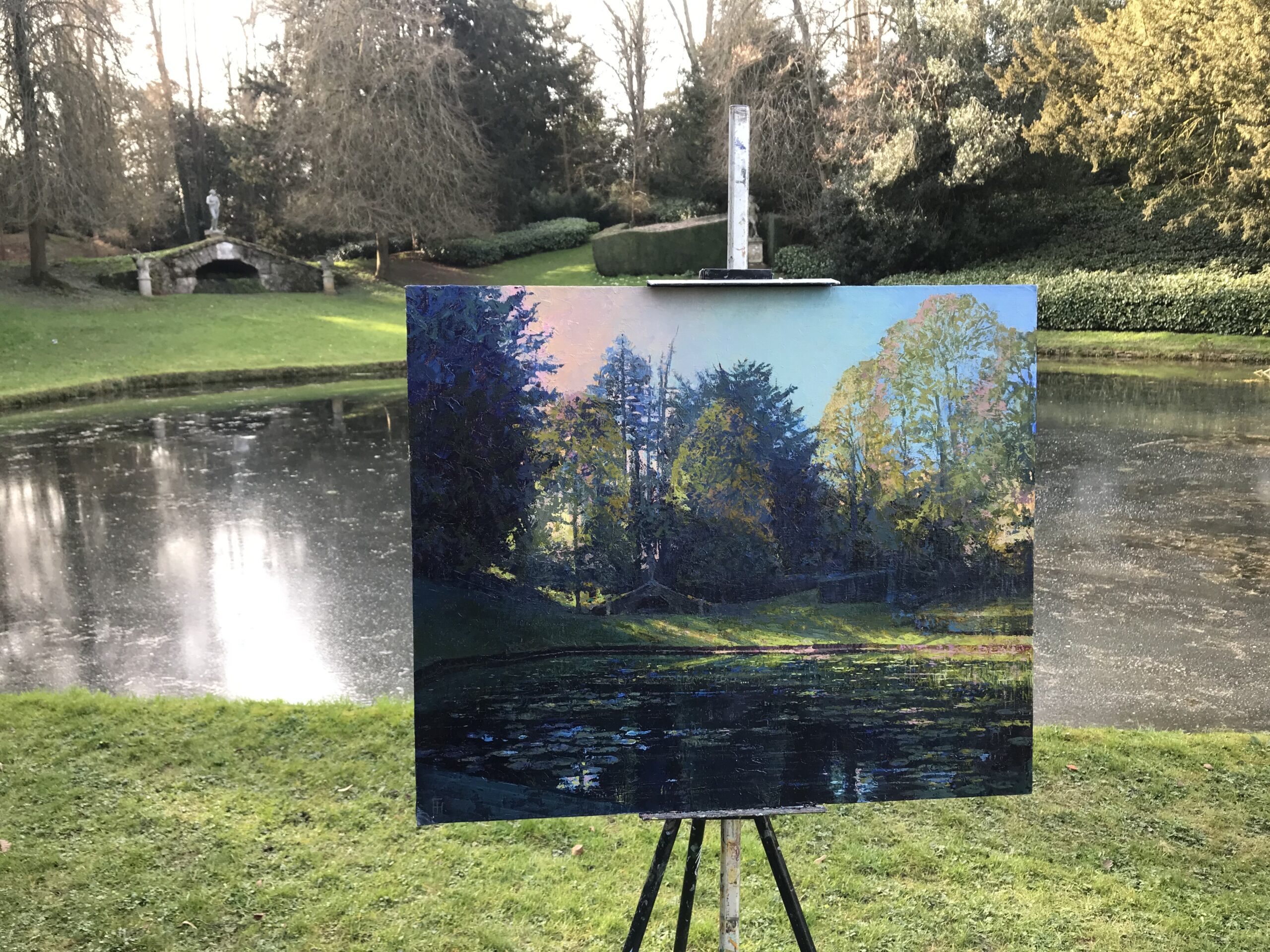 Made over two trips to China and Hong Kong in 2019, Francis Hamel’s exhibition is a deeply affectionate response to a country whose strange and beautiful landscapes gave the artist dramatic new perspectives for his art. Fusing the high, ethereal viewpoints of traditional Chinese landscapes with an ingrained Western eye for topography and light, the artist creates striking analogies between the towering mountains of Huangshan and the skyscrapers of Hong Kong and Shanghai, the enduring presence of the natural world even in the busiest cities. The exhibition includes work from Hong Kong, Yunnan, Guilin, Yangshuo, Shanghai, Wuyishan & Hangzhou.

In 2014 Hamel was commissioned by Sir Cameron Mackintosh and the Master of St Catherine’s College, Oxford to paint portraits of all the professors of Contemporary Theatre at the college.

Sir Cameron had endowed the college over twenty-five years ago with the seat of Contemporary Theatre and since then the professorship, an annual appointment, has been held by a succession of leading figures from the world of film and theatre.  The first professor was Stephen Sondheim who was followed by Sir Ian McKellen, Sir Alan Ayckbourn, Sir Micheal Codron, Sir Peter Shaffer, Arthur Miller and a growing list of remarkable men and women.

In 2019, having completed the first twenty-seven portraits the Victoria and Albert Museum staged an exhibition of the work called “Behind the Curtain”. The display was shown in the Prince Consort Gallery together with a number of other Hamel paintings of the theatre as part of their Performance festival. Hamel did a couple of portrait painting demonstrations in the gallery during the festival

In 2008 Hamel was invited to paint a large collection of paintings and murals as part of the refurbishment of Fortnum & Mason in London’s Piccadilly. The paintings are on permanent display in the store.

There are four large tree paintings behind the tea counter, two still life murals in the patisserie, a large mural in the butcher, and a triptych of the Woodstock Street fair in the Ice Cream parlour as well as a number of other paintings including a large painting of an Avenue of Wellingtonias on the staircase.

In 2018 Hamel was asked to paint a mural at the back of the Royal Dress Circle of the Victoria palace Theatre as part of a massive refurbishment of the theatre being done by the owner and impresario Sir Cameron Mackintosh. In a row of four boxes at the back of the dress circle there was a ‘dummy box, a flat wall with an ornate frame instead of the third out of four boxes. Sir Cameron asked him to paint a life size figure painting of the Crazy Gang who had performed in the theatre during the 1950s and 1960s. The idea was to paint a trompe l’oeil image where the box should have been with the Crazy gang en masse enjoying the show.

The work was done on two large linen panels in his studio at Rousham and then transported to the theatre and installed within the elaborate wooden frame and curtains of the faux box. It was done on two panels in order to be able to get it through the doors into the dress circle. It was a very tight squeeze to get it in because he measured the widths before the doors had been hung!

Hamel used ‘body doubles’ from the Oxford College of Drama for the figures in the picture and photographs and film footage of the gang for the heads and costumes they wore.

Hamel was also asked to paint a portrait of Sir Cameron for the main staircase at the Victoria Palace front of house. The portrait shows Mackintosh in profile watching rehearsals for Hamilton, the show that he re-built the theatre for.